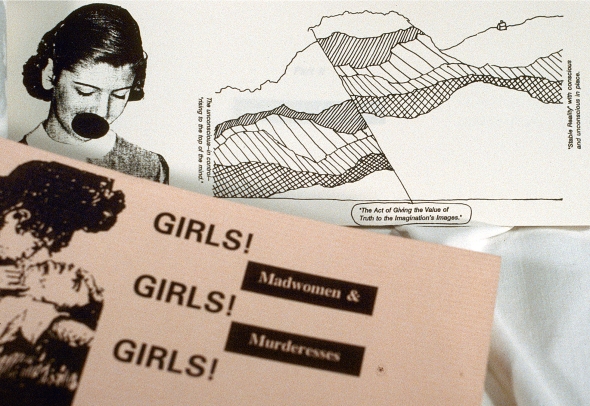 From Printed Matter:
Murderous madwomen Jean Frame, Aileen Wuornos, Madeleine Smith, Jeanne Webber, Karla Faye Tucker, the Papin sisters, Roxanne Gay, Ruth Snyder, and Irma Grese are the players in this fascinating and ambitious artist’s book. Printed on the onion skin pages of the book with black circles over their mouths, the women speak instead through Maher’s collection of quotations from doctors, patients, scientific studies, news reports, and criminal trials. The quotations are accompanied by found and original “explanatory” drawings and diagrams that give a sense of how how elusive any single explanation actually is. The complexity of the cultural phenomenon of murderous madwoman is evident in the titles of the book’s chapters: Madness as Fear and Anger; Madness as Invention; Madness as Failure; Madness as Fragmentation; Murder as Release; Murder as Compulsion; Murder as Silencing; Murder as Scientific Method; Murder as Escape; Murder as Masculinity; Murder as Deliverance; Murder as Ball-Busting; Murder as Domination; Murder as Resistance. The artist created a related Printed Matter window project in September, 1994.